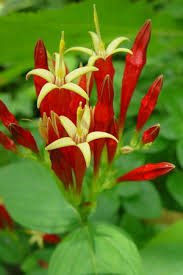 When grown in light filtered shade or a few hours of sun Spigelia marilandica makes a truly stunning perennial. Spigelia emerges in spring and quickly forms a tight, 20" tall patch of upright stems, each ending in a terminal spray of red, tubular, upfacing, star-shaped flowers that open at the tip to reveal a butter-yellow center. A well-grown clump of spigelia marilandica can have over 75 flowering stalks at once. As with most tubular red flowers, spigelia is a great way to draw hummingbirds to the garden. Spigelia marilandica begins flowering in mid-spring but, if the old flowers are removed, your clump will flower again into the summer.

Sold out
Add to Cart